Photos, stories and ways to stay connected with the club.

Please click any of the photos below for a gallery of images.
Email sarah@santarosaclub.com to request high res images for editorial purposes. 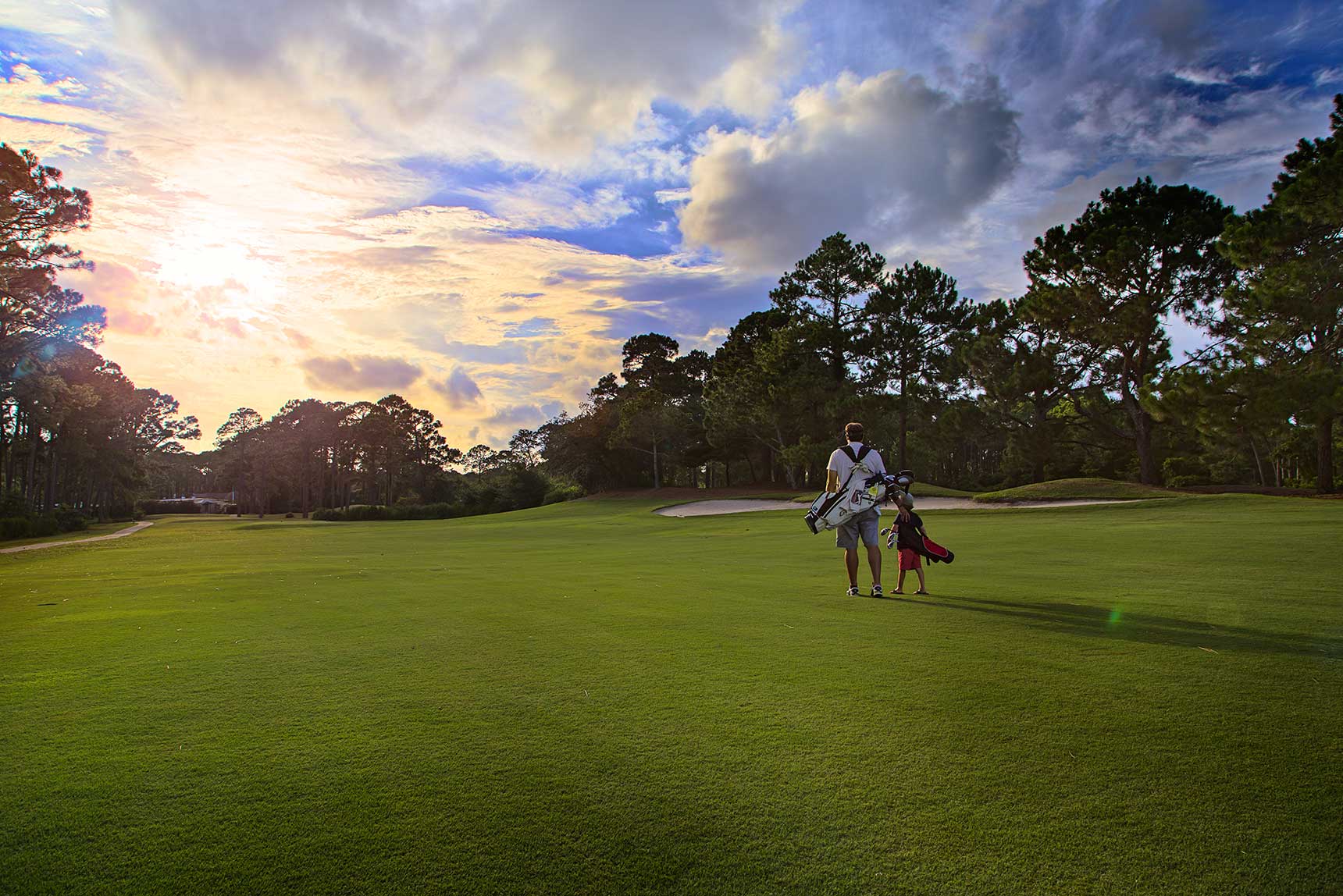 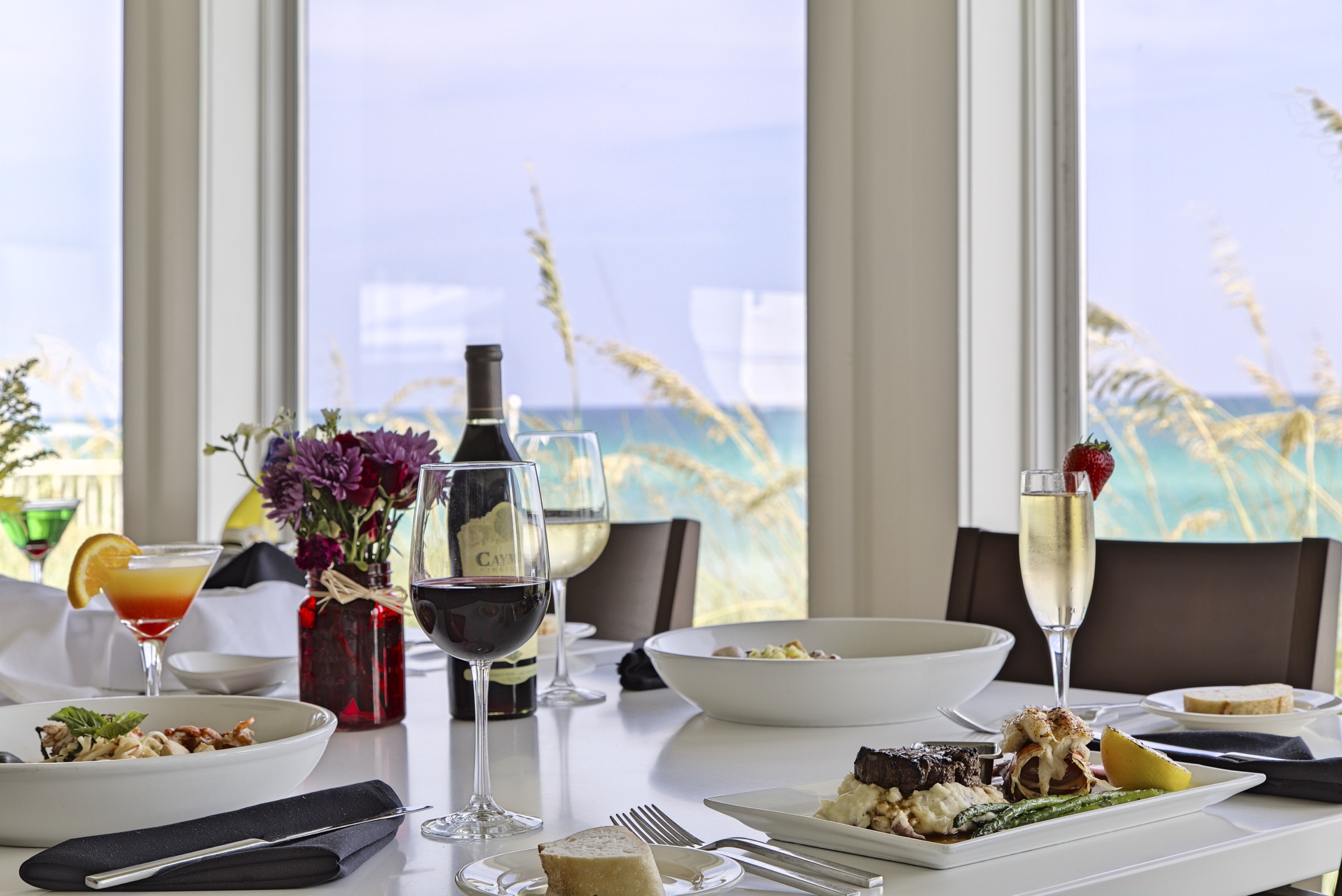 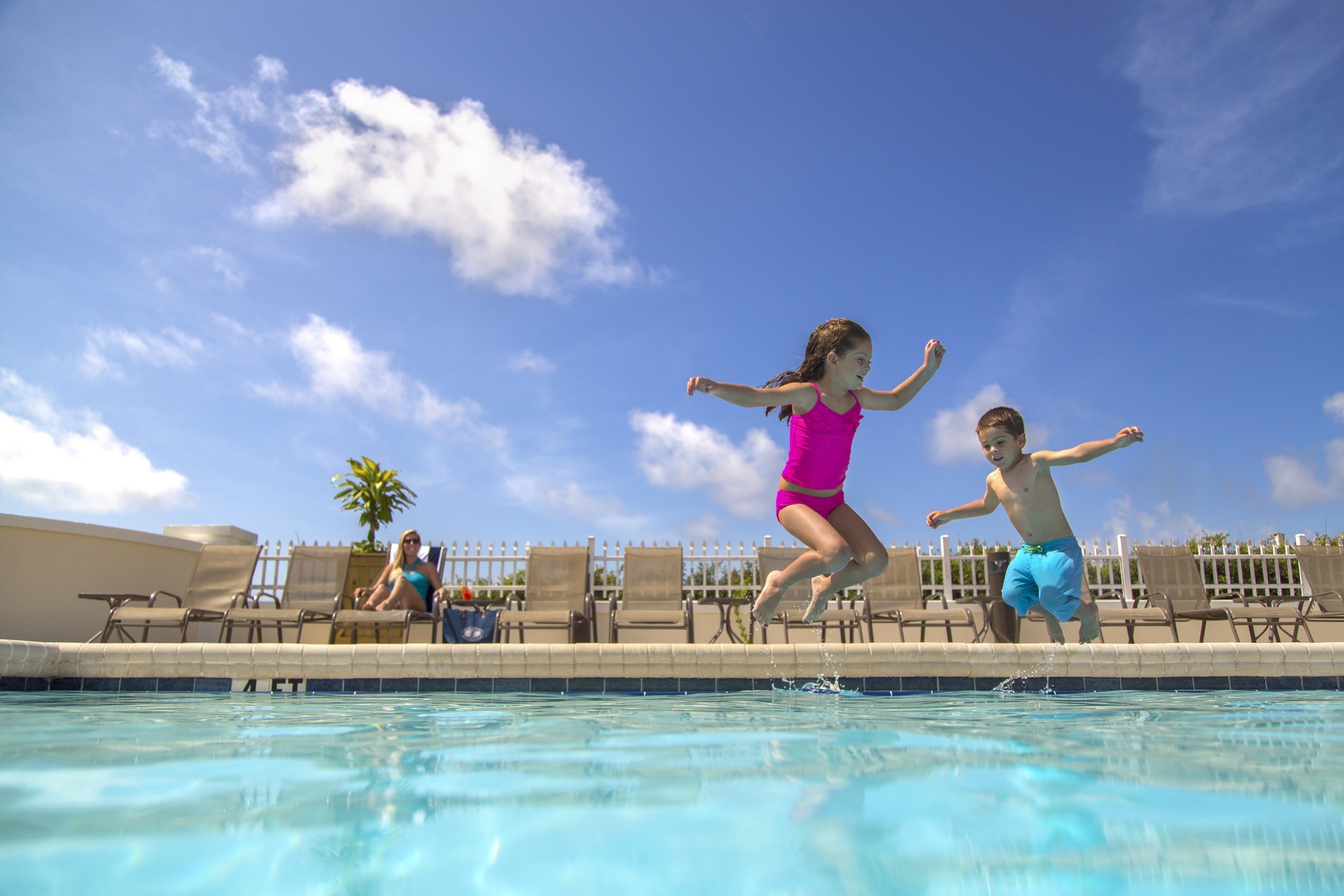 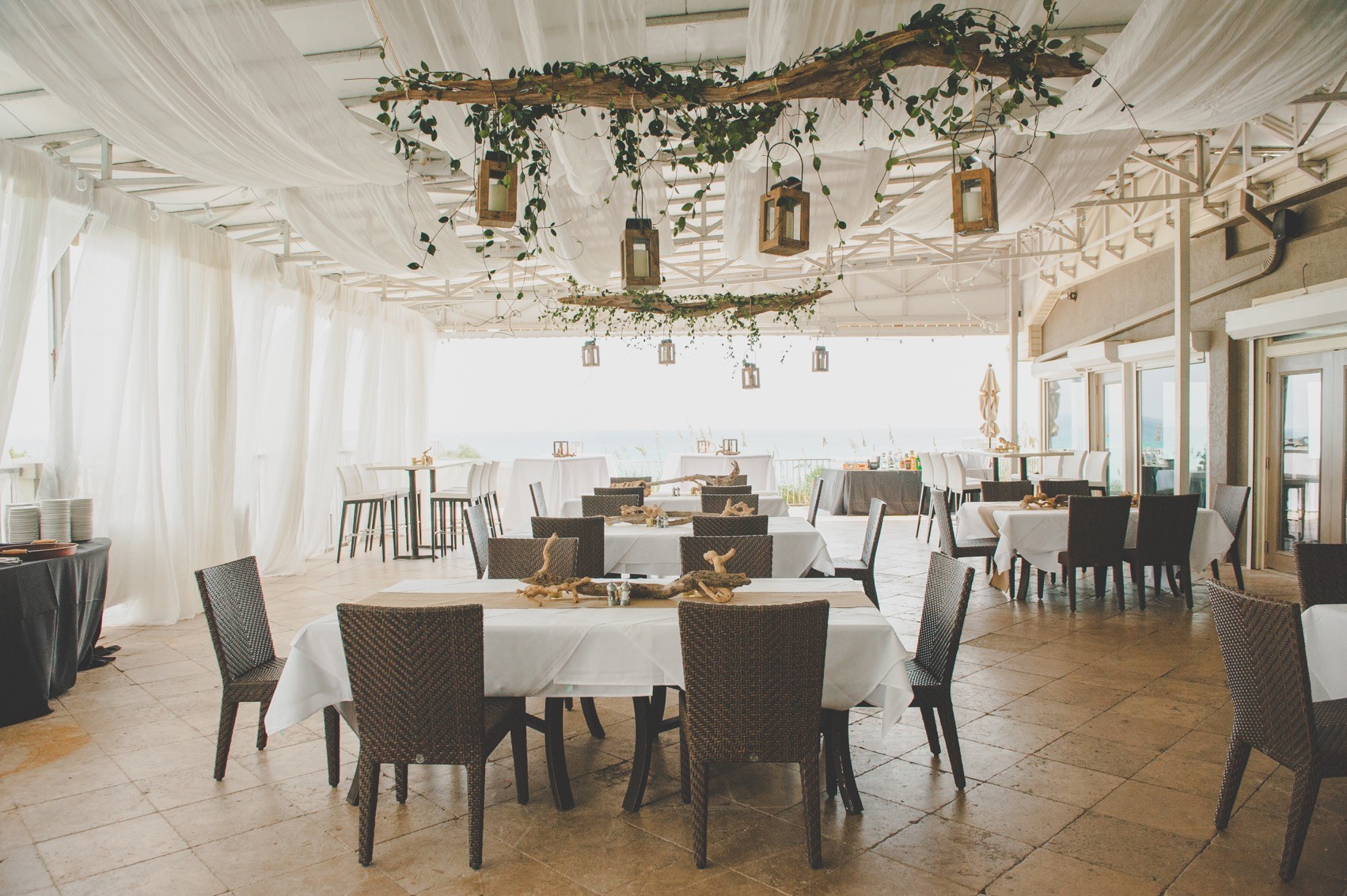 “It’s a total transformation, and I kind of joke, who knew we were going to build a new golf course. Everything has been addressed. All the tees, fairway, greens, drainage, and again the opening up of the natural areas,” said Bill Bergin with Bergin Golf Designs.

Santa Rosa Beach, Fla. (October 10, 2021): Santa Rosa Golf & Beach Club (SRGBC) announced the transformation of their past teaching building into a sophisticated instruction facility. As part of their renovation of the course and club, this facility will provide members with a new learning experience unparalleled to any other instruction facility in the Emerald Coast area.

The indoor, year-round golf instruction facility will showcase expert teaching and learning programs along with a certified club fitting and some of the best golf instruction technology in the world. The instruction provided will be similar to having a group of experts in the room at all times. While other training facilities have similar building and instruction, SRGBC’s full technology package and the level of instruction by their PGA staff make this facility far superior to any other on the Emerald Coast.
-See more at: https://www.thedestinlog.com/story/sports/2021/10/10/santa-rosa-golf-beach-club-builds-indoor-golf-instruction-facility/6024148001/

Santa Rosa Beach, Fla. (May 26, 2021) –Running one marathon is a feat in itself. Running one in every state is phenomenal. Carolann Dunbar; member of Santa Rosa Golf & Beach Club, recently completed her 52nd marathon this May, running a total of 1,362 miles in 50 states.

Dunbar and her family purchased their first home in the 30A area in 2003 and became members of Santa Rosa Golf & Beach Club in 2005, eventually building a house on the number four green in 2016. Since then Dunbar became known as a local running icon along 30A.

The beautiful golf course isn’t the only star at Santa Rosa Golf & Beach Club. The club restaurant, Vue on 30a, has been recognized by both Visit South Walton and VIP Destin Magazine for multiple voter’s choice awards.

Visit South Walton voters honored Vue on 30a by naming the restaurant “Best Fine Dining” and “Best Wedding Venue” in the “Perfect in South Walton” awards program. Additionally, the restaurant was also awarded “Best Place for a Rehearsal Dinner” and “Best Place to Pop the Question” in VIP Destin Magazine’s “Best in Destin” awards. Both VIP Destin Magazine and Visit South Walton open online voting each year to locals and visitors to support their favorite local attractions, restaurants, and more.

The Vue on 30A, Santa Rosa Beach: The Vue on 30A recently got the attention of Food Traveler magazine and is on anyone who is anyone’s list of fine seafood restaurants to sink their teeth into; as a bonus, in addition to expertly prepared cuisine, the restaurant also features incredible views. And, if you’re visiting the beach this spring, they just rolled out a fabulous line of new craft cocktails (pictured at left) to go with that killer view. Tasty.

All of these restaurants offer an elevated look at the kind of food the Southeast is known for. Many of them are classic restaurants with names recognizable around the world (and if they’re not, one day, they will be). So, while there are definitely other incredible places to eat—places that offer semi-casual, casual, and fine dining menus like these places, if you’re traveling to down South, these are some places to put on your radar, or better yet, get on Open Table and book a reservation before it’s too late.

Destin, Fla. (March 10, 2015) – Professional Golf Management, Inc. (PGM) an integrated development, management and consultant company has been selected to continue to oversee the operations of Santa Rosa Golf & Beach Club, a semi-private 18-hole golf club and its beachfront restaurant, Vue on 30a.
“Santa Rosa Golf & Beach Club is one of the most beautiful club’s along the panhandle and has proven to be a success story for the golf industry,” said Matthew Lindley, CEO for PGM. “With the implementation of unique management practices, Santa Rosa has become one of the most popular club’s in its community.” Read More…

POSTURE (picture of the address position): Correct set up positions are based on angles of the body & balance points on your feet. The amount of upper body tilt (from the hips) should be balanced by a similar amount of knee flex…match the angles. Read More…

Santa Rosa Beach, Fla. (January 27, 2014) – Vue on 30a, voted “Best Place to Watch a Sunset” by Visit South Walton and Destin Magazine, today announced a romantic Valentine’s Day dinner for two on Saturday, February 14 along with its top five ways to enjoy the most romantic time of the year. Read More…

Only the Best View

by Liesel Schmidt | The Thirty-A Review

If a picture is worth a thousand words, one can only wonder what would be the worth of the scenery claimed by Vue on 30a. It seems only fitting, then, that breathtaking vistas be accompanied by an equally breathtaking menu of dishes inspired by the coastal landscape stretching as far as the eye can see, a slice of heaven on earth that waits to be served to anyone who simply takes the time to sit and savor. Read More…

The Year in Dining (and Other Things)

by Bruce Collier | The Beachcomber

…Favorite Restaurant of 2014. For atmosphere, service, menu choice, and quality of preparation and presentation, it was Vue on 30a. Everything, from spring rolls to grouper to gelato, was top-notch. Read More…

Vue on 30a Offers More than Great View

SANTA ROSA BEACH – Some restaurants just beg to have a particular name. That is very much the case with Vue on 30A.

While there are plenty of restaurants in the 30A area that are close to the beach, few have a gorgeous unobstructed view of the Gulf of Mexico. I love dining there at lunch, or around sunset for a view that won’t disappoint no matter the weather. Read More…

Santa Rosa Beach, Fla. (November 2014) – Vue on 30a, voted “Best Place to Watch a Sunset” by Destin Magazine and a 2014 TripAdvisor Winner, recently announced its Annual Thanksgiving Brunch to be held on Thursday, November 27 from 10 a.m. to 3 p.m.

Guests will enjoy the most spectacular Gulf front view on 30A while enjoying a delicious collection of holiday favorites like fried turkey and rack of lamb, savory corn bread stuffing a mashed potato bar and more. In addition, there will be coastal favorites like grilled Mahi Mahi, oysters and shrimp. Additional brunch items include an omelet station, a spinach salad bar, desserts and so much more.

“Our Thanksgiving Brunch has become a tradition that we all look forward to each year,” said Shawn Biesel, Vue on 30a Manager. “Chef Giovanni has truly outdone himself this year with the menu.”

Reservations are required by calling 850.267.2305. For more information on Vue on 30a’s Thanksgiving Brunch or on upcoming holiday parties, visit www.santarosaclub.com.

Vue on 30a is Santa Rosa Golf & Beach Club’s signature restaurant located directly on the Gulf of Mexico, showcasing one of the best views for dining in all of South Walton. The restaurant is open to the public and serves lunch, dinner and happy hour throughout the week as well as Sunday brunch. Voted “Best Waterfront Dining” by Florida Travel + Life Magazine and “Best Place to Watch a Sunset” by Destin Magazine, Vue on 30a offers the ultimate dining experience. The restaurant also features Celebrity Chef Giovanni Filippone who is known for his role in the culinary reality show, Hell’s Kitchen Season Five. For more information on Vue on 30a visit www.Vueon30a.com.

By Advertorial special to The Sun

In addition, the club recently announced more than 65 new members have been added this summer, reaching a near cap on their Social Memberships and the best membership growth overall since 2008. Read More…

Sip Into Fall at the Duckhorn Wine Dinner on September 10

Santa Rosa Beach, Fla. (August 25, 2014) – Vue on 30a and executive chef, Giovanni Filippone invite guests and visitors alike to Sip Into Fall at the upcoming Duckhorn Wine Dinner on Wednesday, September 10 at 5:45 p.m.

The restaurant’s celebrity chef, Giovanni Filippone has designed a delicious multi-course dinner menu infused with colors and tastes that showcase the beautiful fall season. The dinner will be paired wines from Duckhorn Vineyards – named “Winemaker of the Year” by San Francisco Chronicle in additional to several of their wines making “Top 100 Wines” and more . Read More…

Vue on 30a Announces JUSTIN Wine Dinner on July 16

Santa Rosa Beach, Fla. (July 1, 2014) – Today, Vue on 30a announced its upcoming JUSTIN Wine Dinner on Wednesday, July 16 at 5:45 p.m. With the most spectacular view in South Walton as the backdrop, the restaurant’s award winning chef, Giovanni Filippone has prepared a multi-course dinner menu inspired by summer time coastal living. The dinner will also feature wines from JUSTIN Vineyards & Winery.

VUE ON 30A ANNOUNCES CHERRYL MARCEY TO LEAD WEDDINGS AND EVENTS

August 28, 2014 (Santa Rosa Beach, Fla.) – Vue on 30a, voted “Best Place to Watch a Sunset” by Destin Magazine and 2014 TripAdvisor Winner, recently announced that Cherryl Marcey has joined the management team to lead weddings and events for 30A’s acclaimed Gulf Front dining restaurant. In addition, Vue on 30a spotlights a fabulous fall wedding season for 2014.

Santa Rosa Golf & Beach Club is proud to honor the families of fallen and injured military men and women through the Folds of Honor Foundation.

“The Folds of Honor Foundation hits home to so many of us in America but also in our community here in Santa Rosa Beach”, said Carter Murchison, director of golf operations for Santa Rosa. “We couldn’t be more proud to take advantage of this opportunity to help support the families of the men and women who have so selflessly served our county.” Read More…

Santa Rosa Golf & Beach Club: where membership is a lifestyle

If you’re looking to play an open course with a parkland feel that winds around water and trees, Santa Rosa Golf and Beach Club course has it all.

Santa Rosa Golf, a semi-private club, has a par 72 course that offers a challenge for every skill level or handicap. Read more…